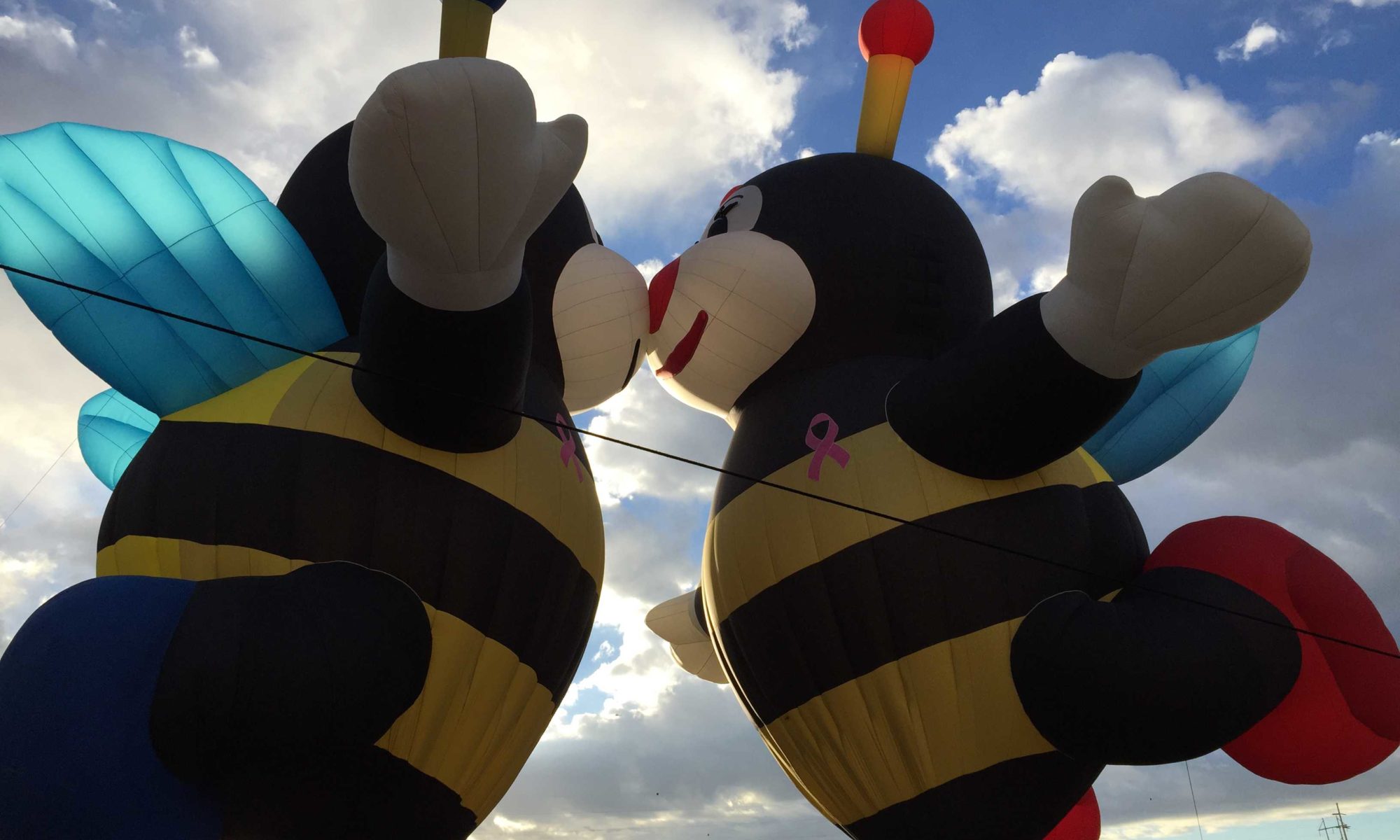 This post has been a long time coming..   We arrived at the Balloon Fiesta a few days early to join up with the Escapees’ group,  a first time with that club.   Our area

was at the extreme south end of the Balloon Fiesta RV camping lot.   Really it’s just a big dirt lot that we were told in prior era was the Albuquerque

dump.   There were a lot of plastic pipes strategically placed sticking up a few inches for someone to open and monitor what was going on below.   When we received the park rules

prior to arriving, I was wondering about the rule where it was a requirement to keep your generator or BBQ two feet off the ground.   Now, with the understanding of potential methane seepage from the ground, it all made sense.

You couldn’t believe how close everyone was parked to each other!   Our spots were 20′ wide, but they seemed much smaller.

We lucked out as the coach to our right (passenger side) decided to park way over to the right of their space, giving us about 4 extra feet of space on that side.   I had folded our outdoor carpet so we didn’t go past our space’s sideline; but when the next motorhome pulled in a few days later, I went back and stretched our carpet back out to its full width and still had a couple more feet of room for the patio. We also got to get some real world testing of the new solar panels,  installed just prior to heading to this event.   They worked better than expected except for a lot of nuisance tripping of the 50 amp breakers I had installed.   Those breakers just weren’t up to the task and kept tripping at around 30 amps of power going into the batteries.  I had a difficult time finding new flush mount circuit breakers while here in ABQ, but eventually found some in stock at an unlikely place called Sportsman’s Warehouse.   Turns out, what I needed was also used for trolling motors and were found in the fishing department of the store.   I installed them and the tripping issue disappeared.  The only problem I found with the new breakers was I could not manually trip them.  So I ordered a new  Bussmann CB185-60 breaker from Amazon when we got home.  These have a way to manually trip them when I want to disconnect the panels from the batteries.

Anyway, back to the Balloon Fiesta.    Our group had a tent where they served breakfast and dinner most of the days we

were there.   As the balloons go up starting at dawn, the breakfast serving began at 5am.   Very early for a retired guy to be awake.   But we did make it for about 1/2 the morning breakfasts,  or at least I did.  🙂

The opening day of the fiesta we took the shuttle bus over to the field.  Thankfully the buses have a road of their own to travel back and forth from the campground to the launch field.  If they didn’t, it might have taken hours to get there.  The traffic was astonishing for that time of the morning,  everyone trying to drive there in their cars at the same time.

We walked onto the field.  It was utter chaos, there were so many

people packed around hundreds of balloons trying to inflate and many others already inflated.  I have never seen anything like it.   It was like some of the old music festivals I attended back in the day, there would be 1/2 a million folks on a large field.   This felt like that plus the hundreds of balloons in different states of getting ready to fly.

Then the balloons started to take off in two’s and three’s and then many more were going up at the same time.  It’s an awesome sight to see from below.   All around us were flight “zebras” blowing loud whistles letting the balloon pilots know when it’s safe to take off as the pilots cannot see anything above them due to the very large bag of hot air above them.  I guess it could be disastrous if they rose quickly into another balloon.

We took so many pictures and videos, I filled up my phone the first morning; so when we got back, I pulled them all off including all the other photos and videos to make room for lots more to be taken during the next 10 days.

If only the pictures did justice to the experience.   There were just so many balloons taking off, it was truly a spectacular sight.   I especially liked the special shapes.  I think my favorite were the three honey bees that appeared to be holding hands during their inflation.   They were a mom, dad and baby bee.  The pilots were so skillful they were able to rotate the mom and dad to make them kiss just prior to liftoff.

The Wells Fargo Stagecoach balloon was fantastic, but we never saw it fly.  Seems they just inflate it, but as far as I know it never took off any of the days

.   Yoda and Darth Vader were very cool and appeared together often.  There was a large stork and a giant statue from the mountains above Rio.   My guess is there were close to 100 special shape balloons.   The big green boot was probably the oddest of the bunch.

A few of the mornings and evenings there was a lot of wind out here in the desert and the balloons didn’t fly in those conditions.  Luckily the festival has an app for your phone that lets you know what is happening so you don’t traipse over to the field at O’Dark Thirty on a morning that proves to be too windy to fly.   There were lots of other things going on next to the field after the flights, one being a chainsaw carving tournament.   After the Fiesta was over and while we were camped at the Cummins dealer, I met one of the chainsaw carvers as their coach was having turbocharger issues.

Most of the days we chose to bring our chairs over to the edge of the field next to the Escapees tent where lots of balloons end up landing when the wind was just right.    From there you can get a better perspective of the amount of balloons flying at the same time.   They told us there were 555 balloons going up.   I didn’t count them, but it looked like there were more than that.

One of the days we were over there, a balloon came back down onto the takeoff field at a very fast clip.   The zebras were frantically blowing their whistles and running around to clear out all the people from the emergency landing area before it could make its hard landing on someone’s head.   It came down with a loud thud and I didn’t see anyone get hit.  Had someone been under there, I bet there would have been a lot of broken bones to deal with.   As it was, I was wondering how the folks on board that gondola fared.   We didn’t stick around to see if any ambulances arrived, but I didn’t hear any sirens as we continued to wander around the field.

We dry camped there for 12 days, our longest boondocking so far.  When we arrived at the campground, it was very warm in the afternoons; but within a few days, the weather became quite brisk early in the mornings.  A few days it didn’t get much over 50 degrees the whole day; and a couple of the days it rained, and we got to experience some thunder and lightning.   As you know if you’ve read our past blog entries, that’s not something we get to experience much living in San Diego!

Each night after the balloon Glows there was a sky diving team dropped above the field that somehow shot off fireworks as they descended.  I had seen smoke used at other events but never fireworks.   I’m not quite sure how they were doing that, but I would imagine that it could easily go very wrong for them.  After they landed on the field, a few minutes later there were 15-20 minutes of fireworks shot off from the launch field.  We brought our chairs over to the club tent and watched them with the 30 or so Escapees members.

The last day of the event was too windy for the balloons to launch and almost too cold for a couple of San Diegans!   Everyone in the campground, about a thousand RV’s, were supposed to vacate before 11am unless you made prior arrangements to stay one more night there.   I was thinking about doing that till the weather forecast predicted “snow” for late Sunday and Monday.     I had called a bunch of local campgrounds to find a place to stay, but no one had a spot available.  Seems like quite a few of the RV’s leaving the balloon fiesta campground on Sunday morning weren’t traveling very far.

We got out of the campground around 10am and were pleasantly surprised there weren’t any issues on the roadways or even much of a line to get thru the traffic signal at the entrance.   Within a few minutes we were pulling into the local Cummins dealer’s parking lot about 6 miles south of the fiesta grounds and there wasn’t another coach in sight.  I had been wondering if it would be packed due to all the campgrounds in the area being full.   I will need to keep these types of places in mind when needing electric hookups during future travels.  We already posted  about our troubles with the coach during this trip.

Next post should be about our visit to the Petroglyph National Monument.